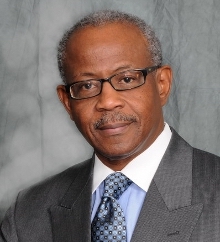 From the small farming community of Bennett’s Point, SC and nearby Charleston, Rev. Nelson B. Rivers, III, son of Merelyn and the late Nelson Rivers, Jr., is a preacher of the Gospel, civil rights professional, and community organizer. He has served as the guest preacher at churches in 23 states from Florida to California and Hawaii.

Rev. Rivers is married to the former Carolyn Smalls of Charleston and has four children and six grandchildren. He received his bachelor’s degree from Wilberforce University in Ohio. He was ordained at the Olivet Baptist Church of Christ in Fayetteville, GA by the late Dr. Howard W. Creecy, Sr. He is pursuing his Master of Divinity at Erskine Theological Seminary, Due West, SC.

In September 2008, Rev. Rivers became the Pastor of Charity Missionary Baptist Church in the Liberty Hill Community of North Charleston, SC. He is committed to preaching and teaching the Word of the liberating “good news” of Jesus the Christ.

His work led to the election of more than 300 new black elected officials in South Carolina between 1986 and 1994. He was a leading organizer of the largest civil rights demonstration in the history of South Carolina when over 50,000 marched on the state capitol in January 2000 to demand the removal of the Confederate Battle Flag.

Rev. Rivers is co-president of the Charleston Area Justice Ministry (CAJM) and was founding member of the organization in 2011. CAJM is an inter-faith, inter-religious group of 25 congregations in the Charleston, SC area committed to congregational work for justice to address the root causes of poverty and injustice, through the empowerment of marginalized people.

He is on the Board of Trustees of Wilberforce University. From 1994 to 1998, he served as president of the university’s Alumni Association.  During his tenure, membership tripled and the alumni contributed over $2 million to the university. Rev. Rivers has appeared on NPR, CNN, and 60 Minutes. He had a speaking role in the movie Separate but Equal starring Sidney Poitier.

He has received numerous awards for his civil rights and community work, including:

Rev. Rivers is guided by the words of Jesus the Christ found in the Gospel of Mark 10:43: “Yet it shall not be so among you; but whoever desires to become great among you shall be your servant.” He is honored to serve as a servant of the people of God!