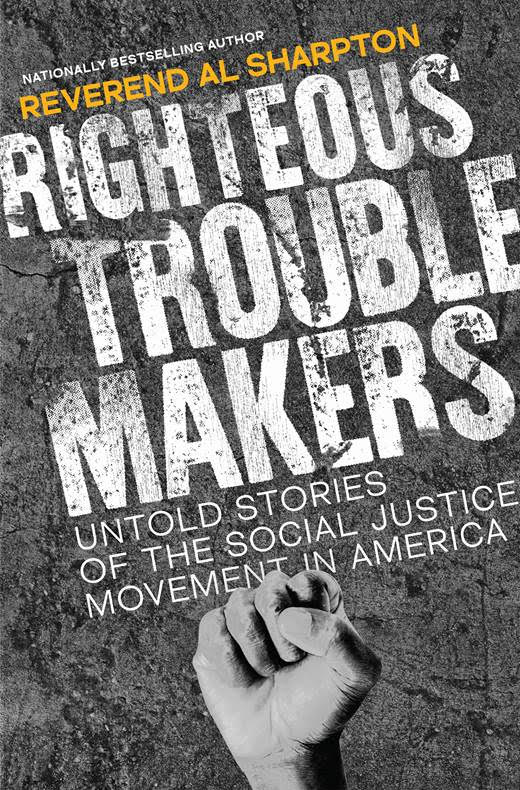 “This is the time. We won’t stop until we change the whole system of justice.” —Rev. Al Sharpton

While the mainstream media may know the major names of the movement, there are countless lesser-known heroes fighting the good fight to advance equal justice for all. Whether working in civil rights, women’s rights, LGBTQ rights, or in environmental justice, they heeded the call when no one else was listening, often risking their lives and livelihoods in the process.

Righteous Troublemakers shines a light on everyday people called to do extraordinary things—like Pauli Murray, whose early work informed Thurgood Marshall’s legal argument for Brown v. Board of Education, Claudette Colvin, who refused to give up her seat on a segregated bus months before Rosa Parks did the same, and Gwen Carr, whose private pain in losing her son Eric Garner stoked her public activism against police brutality. Sharpton also gives his personal take on more widely known individuals, revealing overlooked details, historical connections, and a perspective informed by years of working on the front line of the social justice movement.

From the early days of the Civil Rights Movement to the tumultuous year following George Floyd’s murder, Righteous Troublemakers gives a behind-the-scenes look at the wheels of justice and the individuals who have helped advance its cause. Sharpton offers timeless lessons about the enduring strength, moral courage, and resilience of the American people even in our darkest moments. For anyone who wants to be a change-maker or believes that truth and justice are worthwhile pursuits, this book is as inspirational as it is essential.